VISLET
Small interactive visualizations to help us understand the cities we live in.
Brookyln Residential SalesNYC 311 CallsChicago Crime
Back to overview
Click on a neighborhood to see how the residents use 311.
Selected Neighborhood
Hovered Neighborhood
Borough Average
January 22, 2015

How 311 Data can help us understand NYC

The first thing you may notice is not that many people call 311. In most neighborhoods, only 1 in 100 people may call 311 over the course of a given month. But, when you think about the density of New York, with many of these neighborhoods housing over 100,000 people, it amounts to a very large 311 service. 311 calls are also highly seasonal, with use more than doubling in the winter in most residential neighborhoods.

This is similar to some analysis Wired did in 2010. Unlike the Wired article, which looked at New York on the whole, this breaks up the 311 data by neighborhood. In previous analysis, I have found that the neighborhoods of New York are different on almost ever dimension. Assuming some homogeny under the broad 'New York City' moniker leeds to uselessly general analysis. In this case, I want to see what problems different neighborhoods encounter over the course of their day.

Between 2010 and 2014, over 8,464,747 311 calls were recorded. 751,904 records were not included due to missing x/y coordinates leaving 7,712,843 for visualizing. I chose to normalize the 311 data by population of each neighborhood to accommodate for the vast differences in size and density between each neighborhood. This does inflate certain areas like midtown that are more highly occupied during the day but have few actual residences. The large number of calls there is not a reflection of a larger percent of residents calling 311 but of it actually having a skewed resident to occupant ratio.

In order to make the visualization more useful to people, rather than government agencies, some types of 311 calls have been merged. This dataset covers a four year period and classification systems for 311 complaints have changed over that time. For example, in 2014, 'heat' calls started to be recorded as 'heat/hot water'. In addition to classification changes, some classifications don't provide a useful distinction. In this case, 'damaged tree', 'dead tree' and 'overgrown tree' were merged, as well as 'commercial noise', 'street noise' and 'noise'.

There are still other issues with the data. 90%+ of calls to 311 for 'heat' or 'rodent' were recorded at exactly midnight. You can view the raw data for 311 heat calls here. I don't know if that is just the universal time to report issues with your heat or rodent sightings, but it has forced me to exclude them both from the stacked graphs. 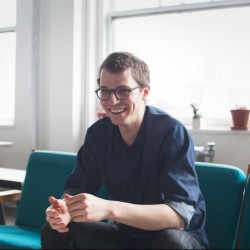